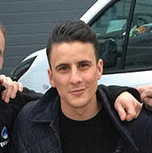 How did The Apprentice winner Joseph Valente kickstart his successful career in business?

Since he was crowned winner of TV’s The Apprentice in December, life has changed radically for Joseph Valente. For starters, he’s been given £250,000 from new business partner Lord Alan Sugar to invest in his Peterborough plumbing business.

“The money isn’t the most important thing,” says Valente. “But it does gives me a platform on which to build a big business. And to have Lord Sugar as my business partner and mentor is invaluable.” Taking part in the show was as tough as it looked, however: particularly when the teams were thrown into business situations that they didn’t know much — or anything — about. “It’s called The Apprentice for a reason, because the candidates are not fully developed business people,” says Valente. “Everyone is still learning.”

Before he became The Apprentice, Valente was an apprentice: 10 years ago, aged 16, he got a place on a NVQ Level 2 apprenticeship with a small plumbing and heating business in Peterborough, working at the firm four days a week and studying at college on day release. By the end of it, he was a qualified plumbing engineer.

“It’s no secret,” says Valente. “I was expelled from school and I didn’t have a lot of options. I didn’t have the right opportunity to go to university and a plumbing apprenticeship presented itself to me. I heard that tradespeople were earning good money and it was exciting. The reason I didn’t get on at school is that I like to do practical tasks. So when I could work and learn in the same environment, it was perfect for me.” He became passionate about his new direction and was never late or missed a day.

Aged 19, Valente left his job, took out a career development loan and went on a full-time course to become a qualified gas engineer. Then, aged just 22, he bought a van and started his own plumbing, heating and electrical services firm, Impra-Gas. But, looking back, he says his apprenticeship was the catalyst for his future success. “It got me where I am today. What I needed was some skill or qualification to further my career. That opened up the next door, because without my plumbing qualification I couldn’t have gone on to do my gas qualification. And without that I couldn’t have gone into business for myself. And then I wouldn’t have gone on to The Apprentice.”

For firms, apprenticeships offer the chance to employ someone who is enthusiastic — and a blank canvass. “It means you can show them how you want them to work in the correct, safe manner,” says Valente. “You can mould that person into the employee you want them to be, rather than taking on someone who is already qualified and stuck in their own ways.”

If he was doing an apprenticeship again, Valente says he wouldn’t change a thing. He certainly showed motivation, dedication and entrepreneurial flair — plus an aptitude for hard work. “For example, the company I was working for folded and college gave me three weeks to find another apprenticeship or lose my place,” he remembers. “So I went through the Yellow Pages and offered a two-week free trial to every single employer.” One firm took him up on his offer “and I worked so hard that, at the end of it, they couldn’t say no.”

Recently, Valente said that “apprenticeships are going to be the backbone of this country, and off the back of this journey I’m going to make sure I go out and promote as much as possible how effective apprenticeships are.” He should know: apart from his own apprenticeship experience as a 16 year old, Impra-Gas has put two apprentices through college and currently employs a business apprentice. “We are looking to build Impra-Gas based on apprentices,” says Valente. “Hopefully, we’ll be able to take on a plumbing and electrical apprentice in September of this year.”

In the meantime, life as The Apprentice is good. “It’s amazing at the moment,” he says. “Everything is really busy as you can imagine. We’re sorting out new logos, building the team, refurbing our offices — and planning how to move things forward.”