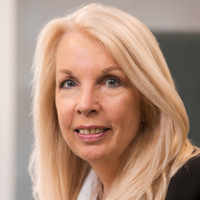 Working in the movies is now a viable option because the film industry is growing — and crying out for new recruits in different areas, from computer coders to accountants.

If you really want to understand the career opportunities available in the film industry, stay to watch the end credits of any movie. All those names scrolling past your eyes are people who have been paid to do a skilled job. And there are lots of them. Your name could be up there too, says Amanda Nevill, CEO of the British Film Institute, the lead body for film in the UK.

“Everyone focuses on the director, writers and producers,” she says. “But, actually, the industry is now so sophisticated it needs every single skill imaginable. That’s why the people that feature in the credits include computer coders, accountants, marketeers, drivers, nail technicians, wig-makers, location managers, people who look after health and welfare, plumbers, electricians and carpenters. The film industry is the superfood of employment for the next generation — and it’s growing exponentially.”

You have to enjoy diversity. Most people working in film will tell you they love it.

No-one is saying that landing a career in the film industry is easy; but, years ago, it seemed impossible to enter and so many job-seekers discounted it immediately. That’s not the case now, insists Nevill. “Going back two decades, the industry was very small,” she says. “Now, though, we’re an enormous, highly professionalised international industry that needs at least 10,000 new entrants in the next five years. We also know we need people who have an education that combines the cultural and the artistic with the practical.”

In fact, the industry is actively crying out for new blood and doing lots of things to entice people to become part of its workforce. For example, the BFI’s partner Into Film now has film clubs in 11,500 schools across the country. “The idea is to get students interested in cinema, but also show them that film and TV production is a credible career that is open to all,” says Nevill. Other opportunities include taster initiatives run by industry professionals, residential courses and various skills trainee programmes.

Good people are in high demand

Be aware that this is an industry where a high percentage of workers are self-employed. But don’t let that put you off, either. “Because there’s a shortage of skills in the sector, if you’re good you’re in high demand,” says Nevill. “If you’re looking for a stable job where you’re at a desk from 9-5, you probably don’t want to work on the practical side of film, because you might need to be up a mountain at five in the morning if you’re a hair and make-up artist or working in catering. You have to enjoy diversity. Most people working in film will tell you they love it. There’s a great sense of camaraderie on set, but there’s also a sense that they have to get the job done. Every shot counts.”